Wafting about in our Jelibias (we are suckers for dressing up) we feasted on patisseries and fresh orange juice in the town square. Oranges are in season here and freshly squeezed orange juice is seriously cheap and seriously good. We had been drinking gallons of the stuff until our stomachs finally protested and we worked out that Hector had consumed at least 15 oranges that day and the result was not good. We decided to work off our breakfast with a 2 hour walk to an old Benedictine Monastery. The Monks were thrown out of the monastery there in 1969 due to fears they were trying to convert people, but apparently they are fondly remembered by the Berbers to whom they provided vital medical care. Some of the monks left to go to Algeria where they were killed after being kidnapped in 1996 (the film Of God and Men depicts their trials and tribulations) One of the survivors returned to Morocco and now lives in the monastery in Midelt, where we were headed to next.

We had been told that we would find Barbary Macaque monkeys at the monastery so Petra lugged up a large bunch of bananas with which to feed them but was most disappointed when no monkeys could be found. I was most disappointed as she refused to give her own family any to eat, preferring to carry them all down again in the hope of feeding more rewarding primates.

We left Azrou and headed into the cedar forests that cover swathes of the middle Atlas. Taking a vague path, we trundled through the trees until we found a secluded spot in which to camp. Supper comprised of peanut butter sandwiches before another torrential rainstorm hurried us into our rooftent nest.

The 25th April 2017 I woke up at 8.30 and climbed down the ladders of our tent to be greeted by a lovely day. I ate a pastry and started making everyone an avocado sandwich. We had laid out a beautiful breakfast, when all of a sudden mummy gasped and daddy said. ‘Oh no no’! I thought they were talking about an insect but as I turned

round I saw a group of Barbary Macaques coming our way. They were so cute. We did some serious tidying up as none of us wanted to give up our preciouses breakfast. Daddy was doing most of the work as I was having fun yawning at them and they would copy me. Hector was armed with a spade protecting our breakfast. After we had put everything away and stuffed down our breakfast we sprinkled crackers on the car and the monkeys climbed on. The silverback then tried to drink the engine oil on the roof – daddy was not so keen on that!  We hand fed the rest of the crackers to the monkeys. Daddy needed the loo and found it most alarming to have so many primate eyes fixed on him.

At 11:30 we said goodbye to our new found pals and set off to Midelt. Mid way there we stopped for tea in a restaurant. In the restaurant they had two baby lambs. I was asking how old they were but the owner thought I was asking how much they were to buy. Ha ha. We got back in the car and continued our drive. 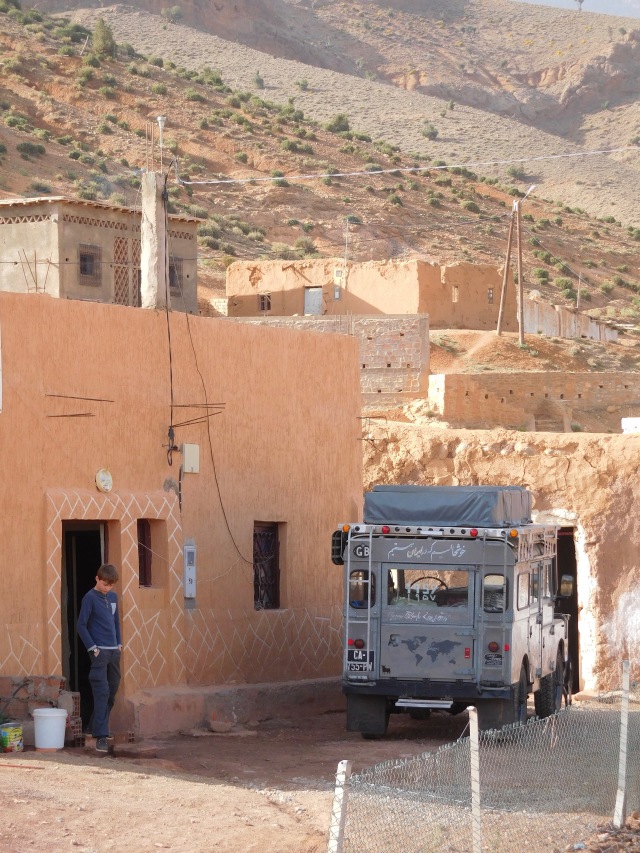 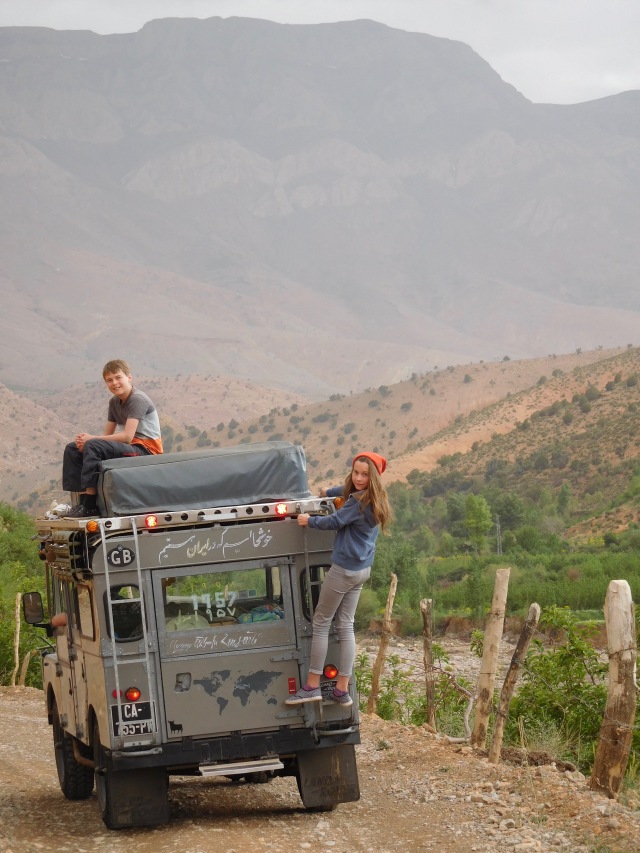 We arrived at Midelt at lunchtime. We ate a chicken tagine. Then after that we got lured into a so called ‘cooperative shop.’ The guy said it sold handycrafts which was a complete lie. Let me just tell you, that we have been in Morocco one week and already we have been in three hellish cooperative shops. Hellish because mummy cannot say NO! So you end up being there for three hours as a guy tries to sell you a carpet that you find ugly and you don’t need. It was so frustrating!! When we wanted to leave and were finally getting out he brought in the tea with the typical saying “Berber hospitality”!!! Finally mummy came out and even better empty handed. Horrray. We got in the car and drove to Tattouine to deliver our humanitarian aid of stationary for the school and some medicine that was given to us by our neighbours in Biarritz, Josiane and Sylvain. When we arrived we asked for the two nuns Barbora and Marie who help the villagers and the Berber tribes. Barbora is Polish and a good friend of our neighbours in Biarritz. She is the local nurse and spends 6 months a year up in the high Atlas with Marie, an 85 year old French nun caring for the nomads. Marie also teaches the young kids in the school in Tattauine. We stayed with Cheriff who is a sedentary Berber who has settled in the village and now runs a guesthouse. After we had been introduced to Barbora and Marie and had some tea, we gave them the care packages full of paper pads, medicine and money. We listened to their tales of how they became nuns and life in the village and with the nomads over a cup of mint tea and homemade bread and honey.   We set of with Cheriff to walk through the valley to meet a nomad family. 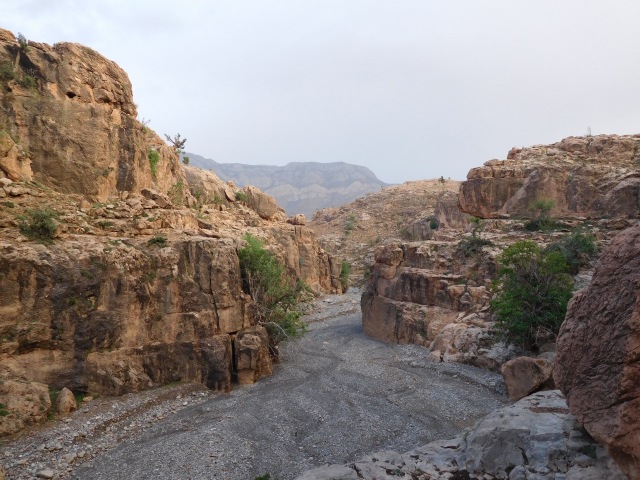 We waked through a canyon and extracted lead from the rocks to Hector’s delight. One hour later, after walking through a shear sided gorge with tumbling sides we arrived at a nomad tent. Let me tell you that this family live here all year round in an open sided tent made of goat hair and we are at about 2000m up in the Middle Atlas. In the winter there is so much snow they live in the caves in the gorge. 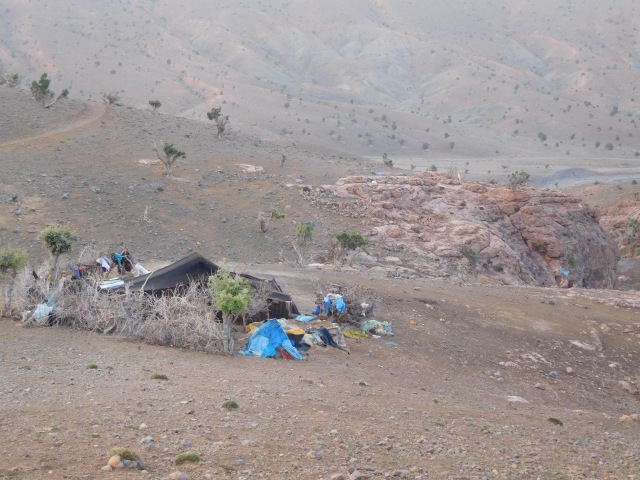 We were greeted warmly and given tea seated on a carpet that the wife had woven on her loom in the corner of the tent. They were such a nice family. In their tent they had baby goats (kids) running around eating everything. It was rally nice but a very hard life for them. The Nomad husband showed us how he catapulted rocks with a sling to herd the goats. We gave them a very cheap but fantasticly useful soar powered camping light and I’m sure they will find it very very useful. It started to go dark and the sun was setting so we headed back to Tattouine. We went back and ate with Cheriff’s family. A delicious tajine awaited us. Then I washed with a bucket of very cold water and a sponge made of my sock and went to bed.

Every family makes it’s own bread – in fact it is actually the women that do the making and in Cheriff’s family it was his daughter in law who was bread maker. Fatima sat on the earthen floor with a huge round washing up bowl full of flour between her knees. Into this she poured water and mixed it with her hands into a vast dough ball. With this she made 6 huge Frisbee flat loaves, which would feed the family and friends for the day. Wheat is the main grain in Morocco and the staple to have with a tajines is bread or what we call cous cous – semolina granuals. (Cous cous for the Moroccans is the entire dish with veggies etc) 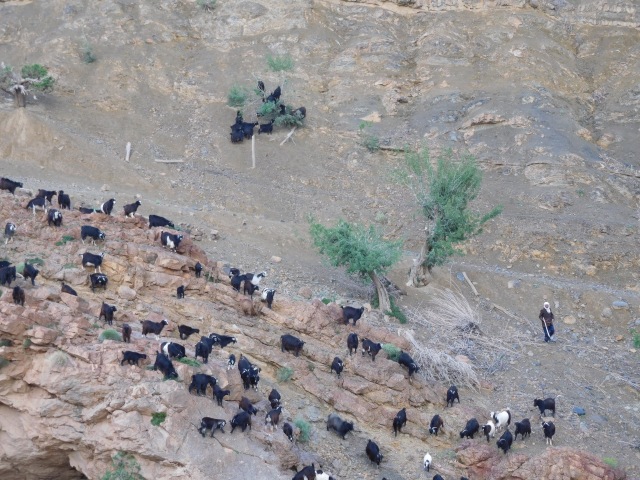 After Frisbee bread and honey, Cheriff took us to see two nomad families who were doing the annual sheep-shearing. It turns out that sheep are bendier than a Mongolian contortionist and the poor beasts were trussed up in what looked like un-believably un-comfy positions.

The three shearers started off with a rousing song before snipping away with their huge rustic shearers in an incredibly skilled way. They were so quick and so close to the skin, I was sure the sheep could not get away without being lacerated. Luckily for them and animal lover Petra, the first three sheep were unscathed by the shears and still able to walk after their trussing.

Next stop was the Cirque de jaffar. An off road drive through spectacular scenery – barren, beautiful and a bastard for a herniated disc. I had to become more creative with my travelling positions – squatting behind the driver’s seat, kneeling facing the rear window, on all fours leaning over the back seat, sprawled across the kids on my back or doing an upside down plank with my feet and shoulders braced to lift my bum in mid air.

We stopped to visit some more nomad families and gave them some of our very cunning solar powered blow up lanterns. The life of the nomads is incredibly tough. So much so, that I doubt they will exist in 20 years time. Apparently none of the girls want to marry into nomad families any more as it is such a difficult life, so the families are having to become sedentary and move into town and send their kids to school so that they can find partners.

Their way of life has probably not changed for over 5000 years and over the next two decades it will most probably abruptly come to an end.

On a dirt track we came across a family moving their tent up into the higher mountains for the summer. Tom was asked to help lift the enormous Berber tent onto the Mule as the owners were far too old and decrepit. In the end we all helped heave up the 200kgs of tent and poles onto the poor patient animal. Though rather sad for the passing tourist, for whom rural poverty is usually very picturesque it will be a relief for Mother Nature when the nomads leave. In the last 50 years the highlands have been so overgrazed and the trees eaten by goats that there is little left. The topsoil has been eroded to desert and the valleys are strewn with vast boulders from the consequent flash floods. Cheriff told us that when he was a child the whole area had been a lush forest with babbling brooks and green meadows.

Next stop the desert…… 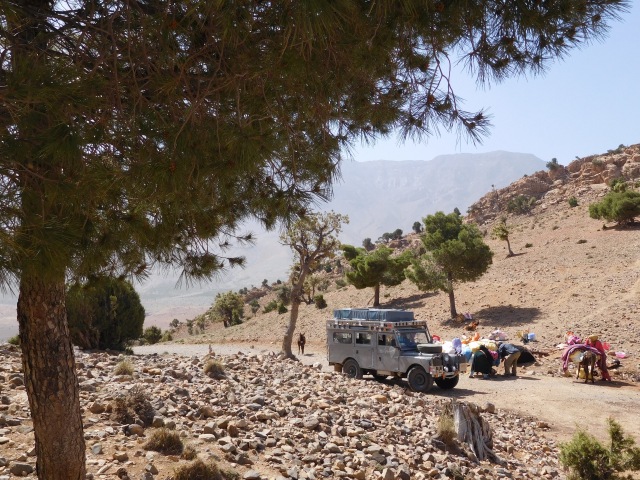 4 Comments on “5. Morocco – Azrou to Tattouine” 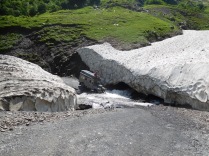 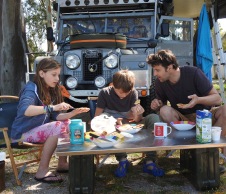 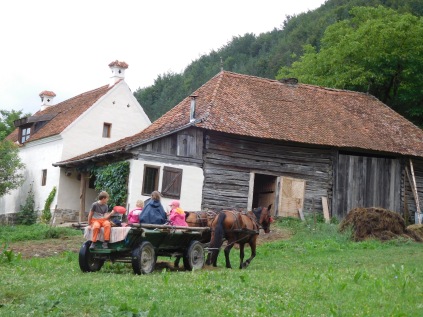 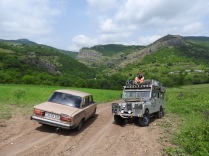