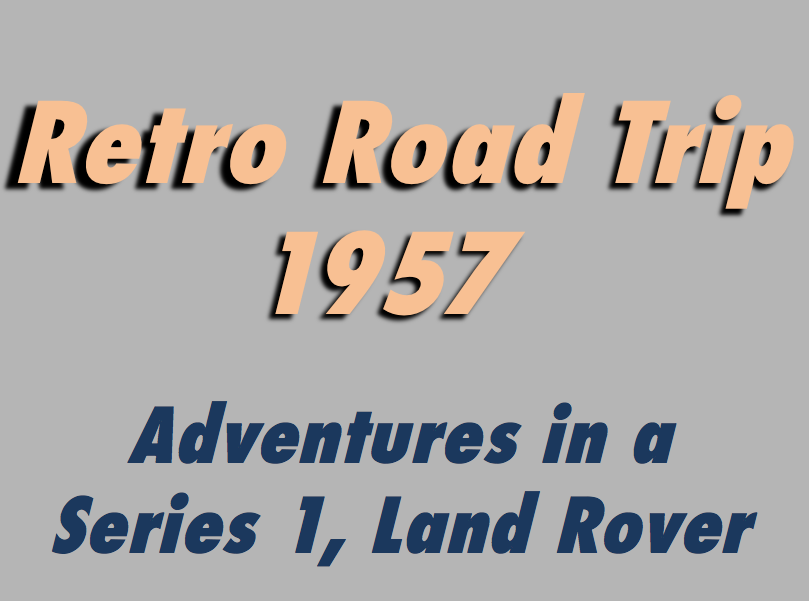 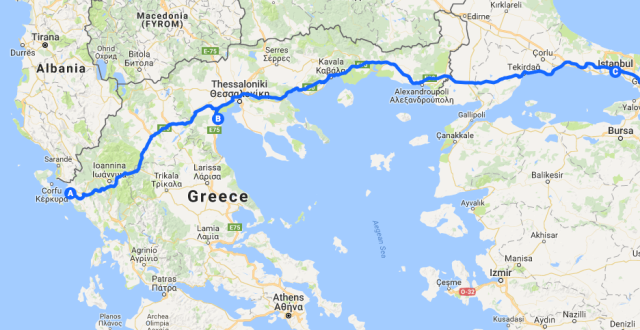 Tom – We have arrived in Istanbul! A last minute flash of inspiration by Justine saved us from a dodgy looking campsite miles from the city and conjured up instead a fantastic, family run, bargain priced guesthouse next to the Blue Mosque. I had been really worried about not having secure parking for Kabylie, with our ladders, jerry cans and other additions looking rather tempting to pilfer, but the guesthouse owner’s assurances that the street was safe enough for the lure of Istanbul to over-rule car security concerns………Kabylie is currently wedged between flower pots in the street outside our window with the night watchmen practically camped on the bonnet.

To get to Istanbul, we had to take a ship from Venice to Ignomanitsa in Greece, which Petra had been looking forward to since we set off and she was thankfully not disappointed. Our cabin had massive fold down beds that delighted the kids and were large enough for a Geek lorry driver. Kabylie was parked happily on deck and was one of the few cars whose clutch didn’t bellow smoke on the very steep ramp up to it. The view of Venice from the deck as we slipped out of the lagoon into the Aege

an looked so romantic and made us rather sad that we did not have time to visit the city.
We happily sailed south over the glistening sea slowly choking on the second hand smoke of our shipmates.

Our first camp site in Greece was our first encounter with the “Overland” crowd and their various contraptions. The crème de la crème was a couple from Chantilly, France on recumbent bikes that are planning to cycle our route this season. This gave us a bit more confidence in our schedule and a bit of concern at theirs. One of Justine’s worries has been crossing the Turkmen desert on a 5 day transit visa in up to 40 degree heat. They are going to have to cycle it in the same time and hotter temperatures in August! 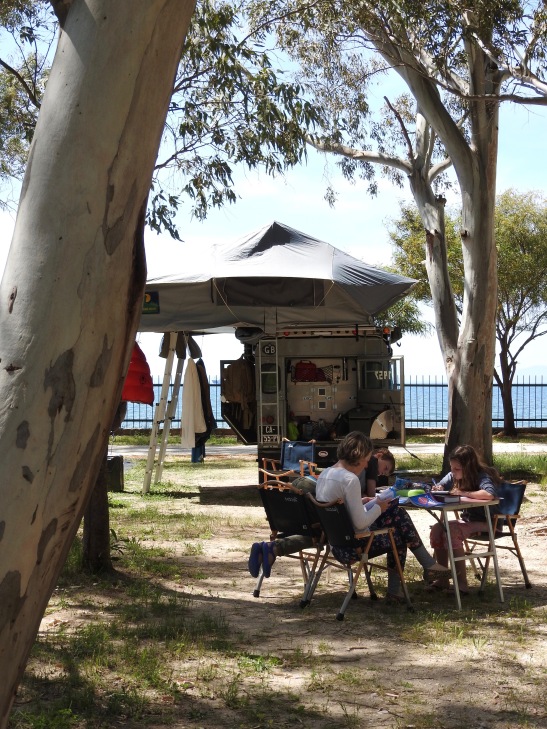 We stayed 2 nights and the team swam in the sea, ran on the beach and paddle boarded on an old windsurfer while I serviced the car and adjusted the brakes.

With the last bit of salt from the boat washed off the car, we set off towards the snow capped Greek mountains. I can’t remember driving on a better road with less traffic.View our tracker

All was going well with two more lorries overtaken when it was generally agreed that there was a burning smell and it was coming from us. As we pulled up to the next tollbooth I pulled over to take a look. One of the rear wheels was almost on fire, so hot that when I doused it with the conveniently placed shower the water boiled to steam off the wheel nuts. I had over tightened the brake shoes the

day before in an attempt to improve the breaking. A broken spanner and a few tense minutes and the problem was sorted and we were back on our way, though sniffing regularly out of the windows.

The next stop in Greece was a nice one by the sea which alas turned sour as the sun went down and we nested in our tent. The lapping of the waves was soon accompanied by Woof, Woof….Woof all flipping night. It is interesting how some nationalities love to tie mangey dogs on short ropes to their property.

They seem to serve no function except to drive the neighbours mad barking the entire night. They are useless as guard dogs as they are chained up and bark constantly whether one is being robbed or not. We can only assume that the Greeks have much better ear-plugs than we do.

A few people have asked about our sleeping arrangements. Our roof tent is like a large popup book. When the book is closed, it is roughly the size of the roof-rack. As the book opens, the back cover folds out, pulling up the tent and extending out over the roofrack, where it is supported by the two entry ladders. The tent is a vast and wonderful den taking about 10 minutes to assemble, (longer to put away). There is a ‘room divider’ which we can put up to make two rooms, one for us and one for the kids. The tent has great mosquito netting except where the poles extend to the floor where there are holes. We are still working on effectively blocking them as the rousing whine of mozzies around ones ears is nearly as annoying as the dogs.

I see that polar explorers Pom Oliver and Sue Richies are signed up for this blog and I remember from your talk to the RGS Sue that everyone is fascinated about how to pee in a tent. In our case it’s a (very) wide necked apple juice bottle for Monsieur and a tupperware for Madame. It works very well and also catches out the native night time apple juice thief when placed on the bonnet.

The truth is Justine and I have not been sleeping well but this is more to do with the task in hand than the tent. As we blearily packed up the tent the next morning Hector wonderfully asked “Dad, do they sell good bungees in the East?”

He had picked up on our apprehension as we approached the boarder and this was obviously his personal concern. We had sadly seen some refugees being returned by the police on the ferry from Greece and in tents camping by the roadside.
We therefore thought it best to tackle the border in the morning so we found a great spot near the sea for our first wild-camp (i.e. not on a campsite) next to a Cyclopes cave, which seemed appropriate for our last night in Greece. Close but not too close to the border.

The road to Turkey was again deserted making us think that maybe the border was closed. A queue of trucks and the first vast Turkish flag, the first of many that line the road all the way to Istanbul, marked the frontier. As it turned out it was quite painless. The border crossing though certainly looked the part. A rickety bridge with Greek flags one side and Turkish the other. Bristling with armed guards scouring at each other over the Meric river. On the Turkish side our documents were inspected closely.View our tracker

“Occupation?” I was asked. (I often look shifty at this question)

“Where yoow going” He asked looking me up and down and then the car.

“Haahh C.I.A” he scowled as he tossed me back my passport

He had obviously been watching Bond films and had seen Moneypenny in the passenger seat.

We trundled off on another excellent road into Turkey and were ecstatic as we overtook not one but two cars and about 5 lorries. Strangely this part of Turkey looks uncannily like Essex in June at this time of year. The same rolling countryside and the oilseed rape just coming into flower but again the roads are better. We will have to see how long this lasts but since leaving Cambridge the M11 is by far the worst and most heavily congested road we have been on.

Unlike in Greece, petrol stations in Turkey are every kilometre, sell everything and even it seems have prayer rooms. Hector spotted this when he came back telling us about a gym. On the way to the loo he had seen through a door people doing what he was sure was gymnastics on the floor.

Approaching Istanbul by car is becoming more like approaching a vast Chinese city. Miles of sprawling tower blocks and shopping centres. We were beginning to panic that maybe driving into Istanbul was a mistake but Petra had insisted and we were not disappointed. The last minute change of plan and a call to the Marmara Guesthouse found us driving down magical streets in the depths of the old town to a guesthouse ridiculously close to Hagia Sophia. The colour and smells and the blasts from the ships horns in the Bosphorus drifted over the old city and mingled with the call to prayer from the meuzzin’s in the minarets of Hagia Sophia and the Blue Mosque. What a city! 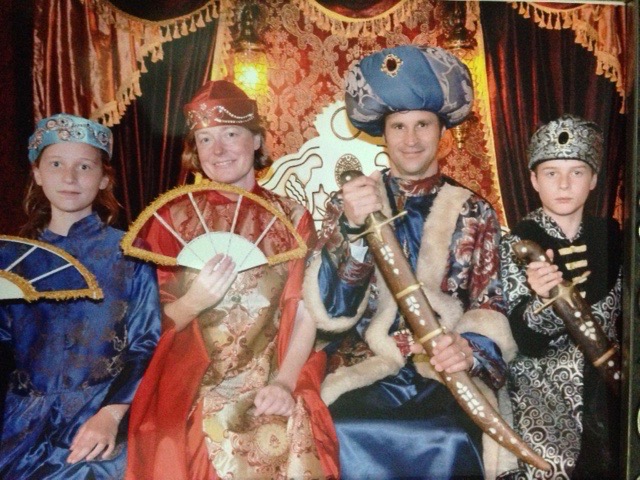 We have spent a fantastic day seeing all the sites a stone throw from our guesthouse. Even better, there is no space in the car for anyone to buy anything so even visiting the Grand Bazaar was a pleasure. The recent tragic attacks here have cleared the city of tourists so we have had the place to ourselves. Tomorrow we will somehow untangle Kabylie from the street she is wedged into and again head East into Asia for the first time. Our next post will hopefully be from Trabzon in Eastern Turkey where we meet Justine’s parents before hopefully crossing into Iran. 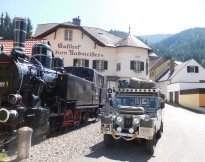 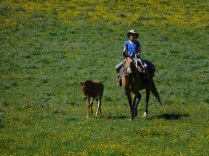